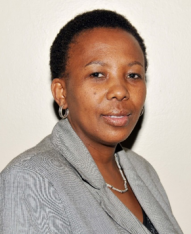 South Africa did not roll out SLMTA until 2013, .a late comer compared to many other PEPFAR-supported African countries who adopted SLMTA soon after its launch in 2009. However, thanks to Patience Dabula’s strong leadership, SLMTA has been implemented in South Africa with remarkable speed, success and sustainability, with 10 SLMTA laboratories accredited by SANAS between 2015 and today.

Patience is South Africa’s National Quality Assurance Manager at the National Health Laboratory System (NHLS).  She realized that the rate of accrediting laboratories was slow in the public sector in South Africa. When she was introduced to the SLMTA program in 2012, she saw its potential and became its biggest champion. Under Patience’s able leadership, South Africa quickly rolled out a series of training to expand the SLMTA program, including:

Besides the dazzling speed that South Africa’s SLMTA laboratories were accredited, other benefits have been witnessed in the NHLS, such as: increased knowledge and skills in quality control processes, and resources available to conduct workshops on specific topics such as ISO 15189:2012 transition. The impact has been felt throughout the organization by embedding the learning from the training into procedures.

Patience’s impact goes beyond South Africa. She has generously provided logistical and funding support for regional SLMTA training, where participants came from all over the world, when the training risked being cancelled due to funding shortage. Thanks to Patience, the SLMTA fire continues to burn and spread.

The passion, drive, and leadership demonstrated by Patience make her a role model and inspiration for all of us. We salute her as our SLMTA hero.